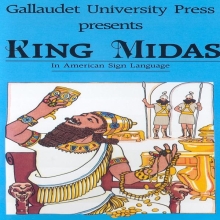 The story of King Midas and his golden touch is retold by Mike Lamitola. He first shows and explains key signs used in the story along with their English vocabulary words. Then, ten selected sentences illustrated in the *companion book, King Midas, are shown so that young viewers can learn and recognize them. These introductory parts will help the young viewers understand and appreciate the story of King Midas that Mike performs during the final part of the tape.