Switched at Birth: Volume One 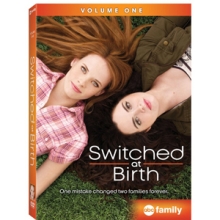 Switched at Birth tells the story of two teenage girls who discover they were accidentally switched as newborns in the hospital. Bay Kennish grew up in a wealthy family with two parents and a brother. Meanwhile, Daphne Vasquez, who contracted meningitis and became deaf at an early age, grew up with a single mother in a working-class neighborhood. Things come to a dramatic head when the families meet and struggle to learn how to live together for the sake of the girls.