Alphabets Around the World 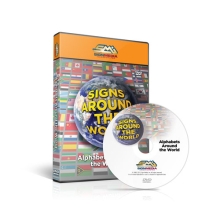 Provides a sample of various manual alphabets used in 18 selected countries around the world. It illustrates some of the differences and similarities between them. Each of the individuals featured in this tape is Deaf and is from the country indicated. Each alphabet is presented 3 times - once at full speed, once in slow motion and again at full speed. Prior knowledge of a given countries’ alphabet would be useful. Alphabets from the following countries are included: Argentina, Australia, Brazil, Chile, Dominican Republic, Finland, France, Germany, Chana, Italy, Japan, Namibia, Pakistan, Quebec, Thailand, United States, U.S.S.R., and Venezuela.