Dr. Seuss's The Cat in the Hat, Interpreted Performance 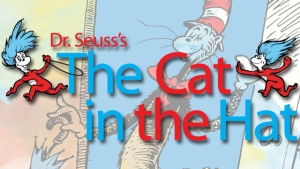 Based on the book by Dr. Seuss

Play originally produced by the National Theatre of Great Britain

For the 56 years the Cat’s been on the page,

We could never get rights to put him on our stage.

Now, thanks to the National Theatre of Britain,

At last, a stage version has finally been written!

With no added text (lots of mime, dance and movement)

And Seuss illustrations (which need no improvement).

The Cat in the Hat will be here in the spring,

But he won’t be alone, no! He’s going to bring

Dick and Sally, the Pink Fish, Thing One and Thing Two!

They’re all going to be here, so how about you?

Appropriate for families with children of all ages.